Yes I said I was done with my series, but as I was preparing to post these last two to my instagram feed it dawn on me that they needed new stories too. In the previous version they were called the dreamer and the performer.

Now that I’ve gone through a whole bunch of these I understand the trick is to find the elements from the image and translate them in the text, using idioms if I can find good ones. On the left there was the moon, and the bird split in two with one half fleeing and the other half hiding. Turns out the final lesson was.. be yourself! Sounds so simple, doesn’t it. I don’t know why it’s such a hard thing to do, but it is. 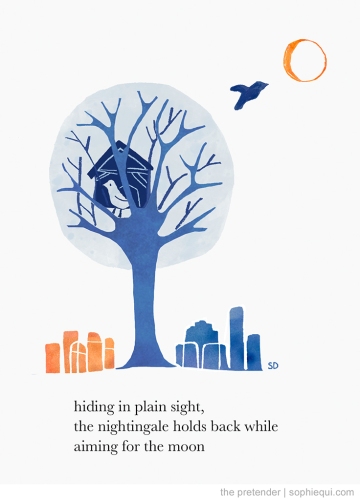 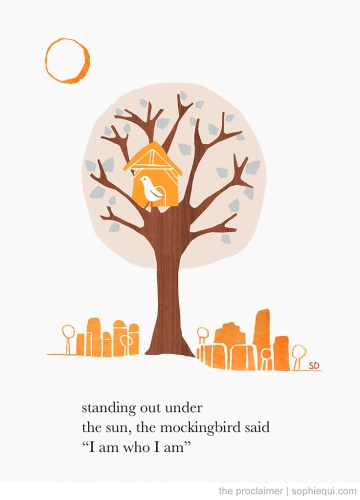 As a child I was told many times, find out who you are, yet at the same time there were many expectations and teasing which seemed to tell me that who I was in reality was not acceptable. This can create a kind of tug-of-war within, wanting to adhere to a certain ideal while keeping the real self under wrap for fear of being ridiculed or criticized. Even working through this series of illustration my inner critic kept telling me it’s stupid and I should stop. All throughout this fall I’ve had this feeling of something coming to an end. And maybe it is the end. Or maybe it’s a new beginning? The New Year will tell.