What can you make with an old can and a couple wire hangers? Aaron Kramer will tell you, a kinetic sculpture! I like things that move, but typically my thoughts go to animation rather than moving mechanical parts. You would think the opposite, since in some distant past I managed to complete a degree in mechanical engineering. But somehow I was better at the math part of it, which is probably why I now write code instead of designing machines. So anyway, back to the sculpture. Aaron gave a workshop last Sunday on how to make a moving one that anyone can learn to put together. 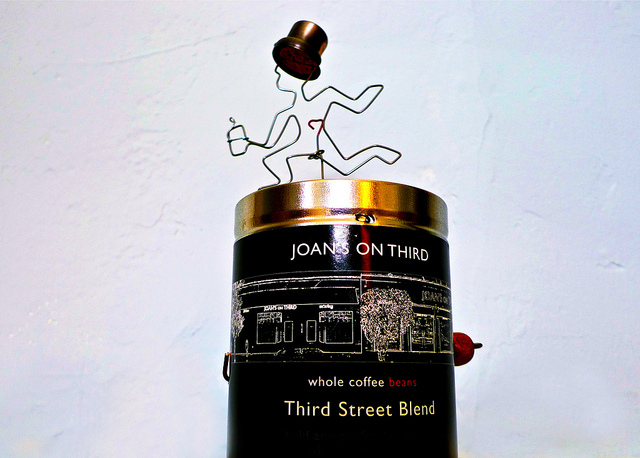 I found out about the workshop back in June, when I discovered we have a museum of Craft and Folk Art in Los Angeles (CAFAM). Very cute, modern little museum. It’s close to LACMA and a little gem of a museum.

The workshop took place in a back room of the museum on the first floor. Quite a few of us had the same idea, I don’t know, maybe thirty people? There were some kids in their early teens, with their parents, and people of all ages.

Considering we were all starting from scratch without any prior experience or idea of what we were doing, it went amazingly smoothly. Aaron first walked us through the process with some sketches and gestural demonstrations, and then we all grabbed our pens, pliers, and wire. A staff member of the museum was available to help anyone who needed it. The project was fun, challenging enough to be interesting, and most importantly everyone was able to complete on time. Very well run, I will sign up for more workshops in the future. 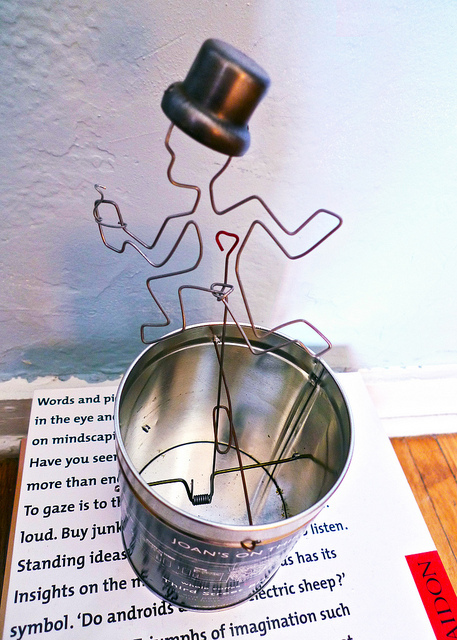 On the top you can see the mechanism that activates the sculpture. You turn the crank and the character moves up and down. Since my can was meant to hold coffee beans I chose to make my character a man running high on coffee, which might explain why he’s jumping instead of moving forward! I have another similar can, white for decaf, which is what I normally drink. The black one was for when my parents came to visit, they are caffeine addicts. I think I’ll make another sculpture with the white can and have the character be a woman, it will make quite a pair..