Sometimes last month I met with Ellen, who holds the store Entertaining Elephants, for an exciting new project: a bunch of empty indian clocks she wants to fill with dioramas. A friend had seen the diorama I made in an old wooden radio and told Ellen about it. Picking from a large bag filled with clocks of varying shapes and finish we chose three for me to take home and tinker with. This grey one, a green, and a blue.

Since animals are popular with kids and I like to illustrate them, we decided that I would do different animals in each clock. This one being grey, I immediately thought of the elephant, and Ellen loved the idea of course given that she name her store Entertaining Elephants.

It was tempting to go with an indian style elephant or perhaps a circus elephant, dressed with rich decorations. But knowing that circus elephants aren’t well treated and also that elephants are threatened of becoming extinct I decided I wanted the kids who would have this diorama in their room to develop an image of elephants as free beings in their natural habitat. Something like a magical habitat, not necessarily realistic looking, but like an elephant dream.

For inspiration I looked at my book You are stardust and searched for paper dioramas on Pinterest. Previously I had been thinking of a diorama more like a space to fill with things, like a room, but this time I wanted to try layering paper and lighting to make it something of a tridimensional illustration. 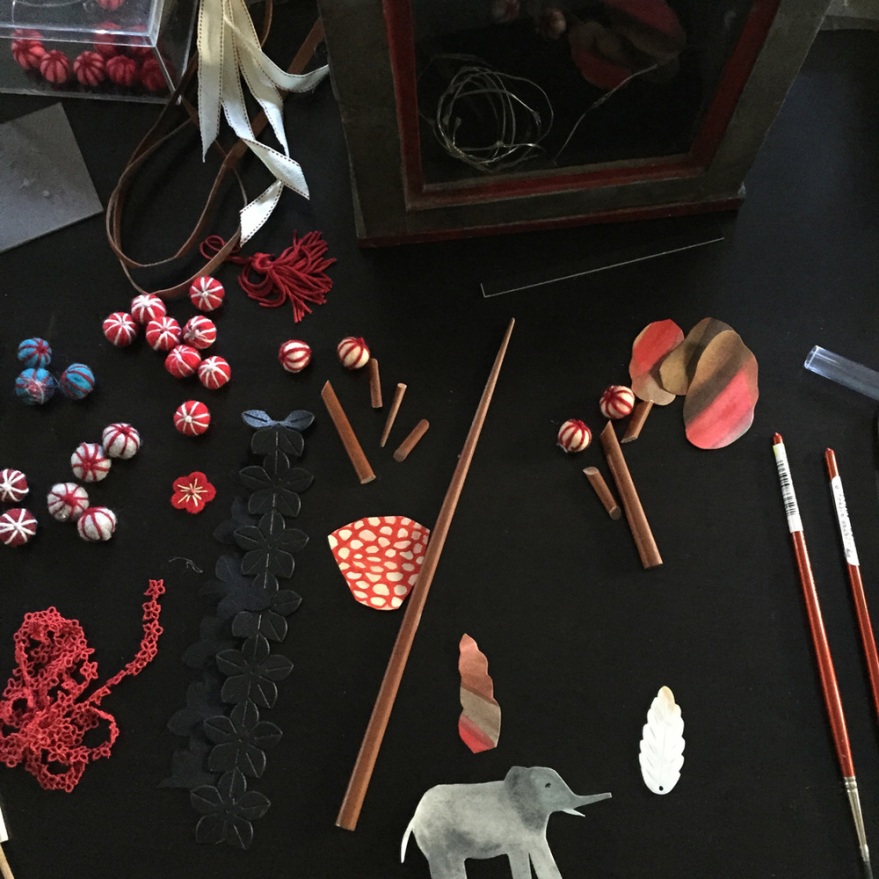 I shopped around for lighting and the best option I found was Moon lights at JoAnn’s fabrics in the florals section. Unlike most small LEDs I saw these give a warm light and they also have a switch, which is important to be able to turn on and off easily. The first step was to figure out how to install the lights so the switch is easily accessible and operable but hidden enough to not be ugly. After that came a lot of exploration with materials, getting a sense of the physical space available and developing an idea for the illustration. 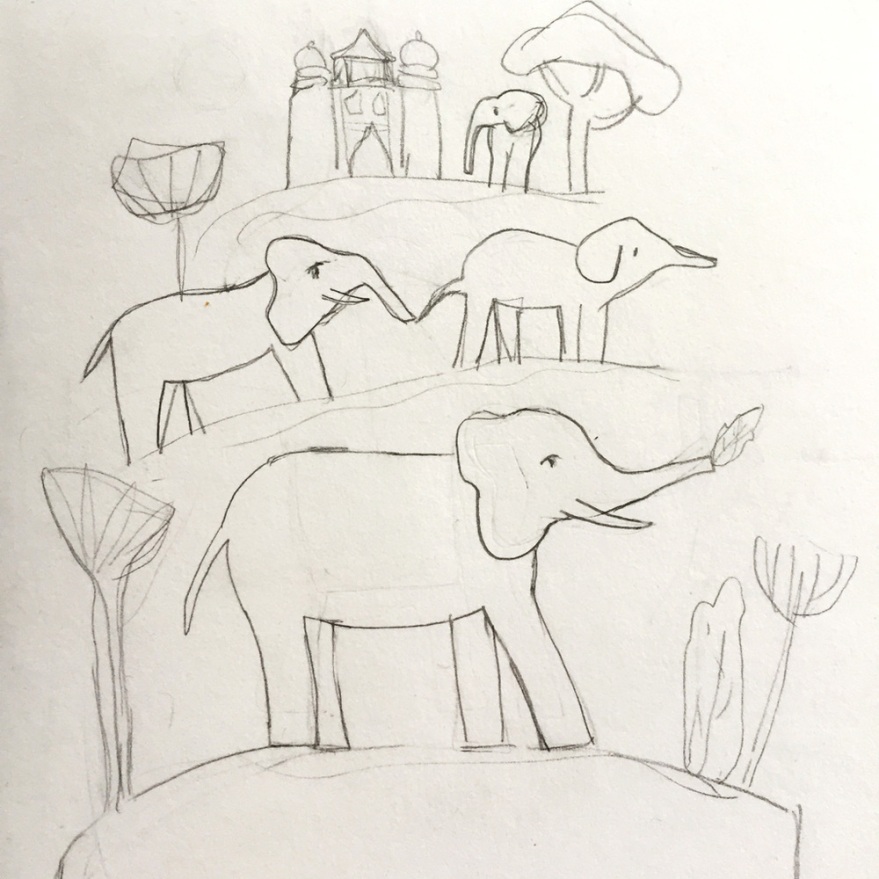 For me ideas usually come after I’ve looked at a lot of things and reached a state of mild panic that I won’t find one. At that point where I’m almost ready to give up is when I finally start putting something down and then it’s like, oh, well there it is… that’s my sketch!  After that it’s all about figuring out the execution but that’s the fun part. Starting with watercolor I painted a bunch of textures that I then cut in the shapes of my sketch.

There’s the messy process. What to do for the background and the hills? I tried to make do with what I had on hand, but sometimes the best is to go at the art store fishing for the missing ingredient. Turned out to be a really cool handmade Thai paper that felt almost like fabric. Flexible and transparent enough to let some light shine through. I bought some acetate and used 77 spray glue to mount it on.

Putting everything together and weaving the lights I held my breath (and cursed a little) more than once, but I was very grateful for my small fingers.. and it actually worked, whoo hoo! 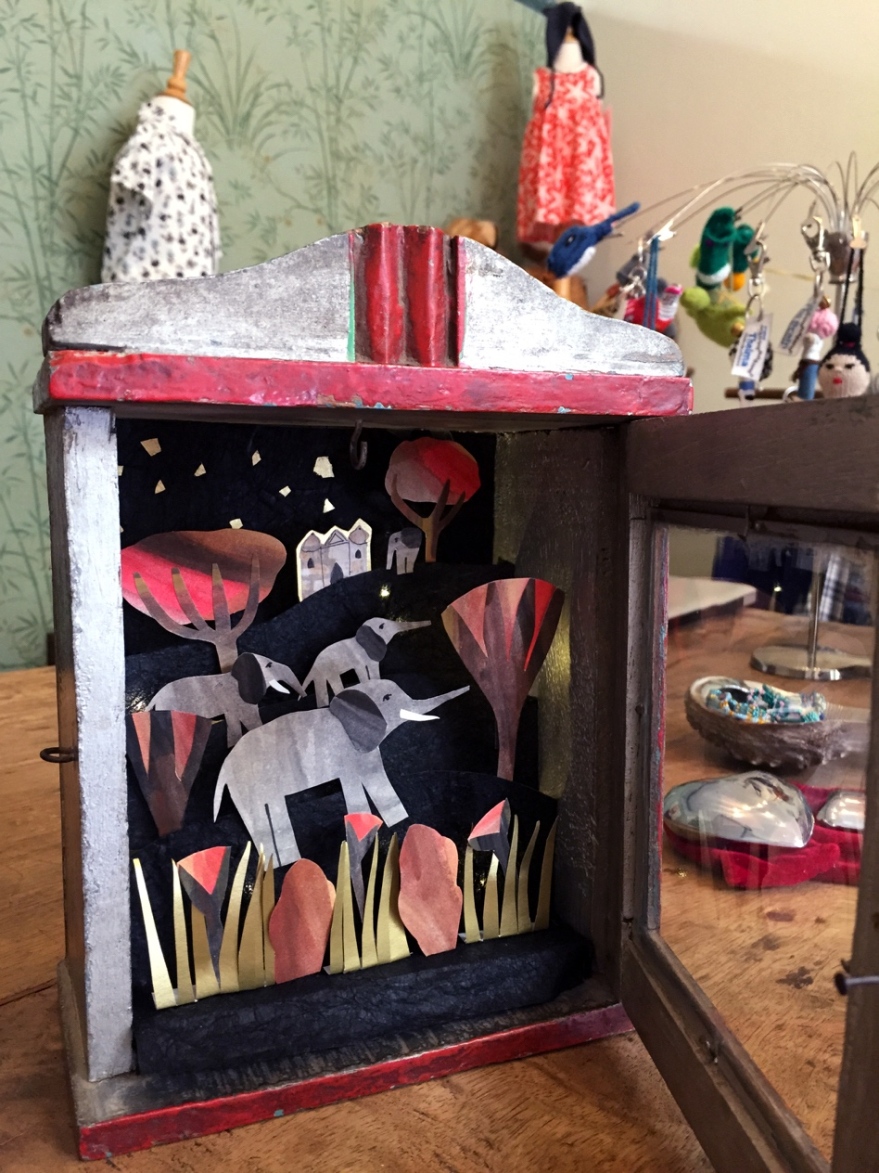 And here’s what it looks like where it will be sold, I just delivered the finished piece a couple days ago. Now two more to go!